How to Use Regular Expressions in Chatbots

Regular expressions are patterns that you can use when the preset validation methods are insufficient to compare a value received from a subscriber with a template value.

For example, you can use regular expressions to check a phrase for keywords and word count, the presence of spaces and other characters, as well as to enter numbers within a certain value range or check for a link to a social media account.

In the tables below, you can see the basic symbols that are used when composing a regular expression.

Flags are specified after the regular expression. The order of the flags does not matter.

Meta-characters are characters that are not letters or numbers but have a specific role in the syntax of a regular expression. For example, * is a repetition quantifier.

To use a meta-character for a different purpose, it needs to be shieldescaped. For example, to make the * symbol no longer be a repetition quantifier but an asterisk symbol, you need to use shielding.

See the table below for the characters that need to be shieldedescaped.

To learn more about regular expression syntax, see the table at exlab.net.

How to Use Regular Expressions in the SendPulse Chatbot Builder

Drag and drop the Message element item from the left pane of the chatbot builder. Activate the "Wait for subscriber's reply" option. Select the "Regular expression" as validation. 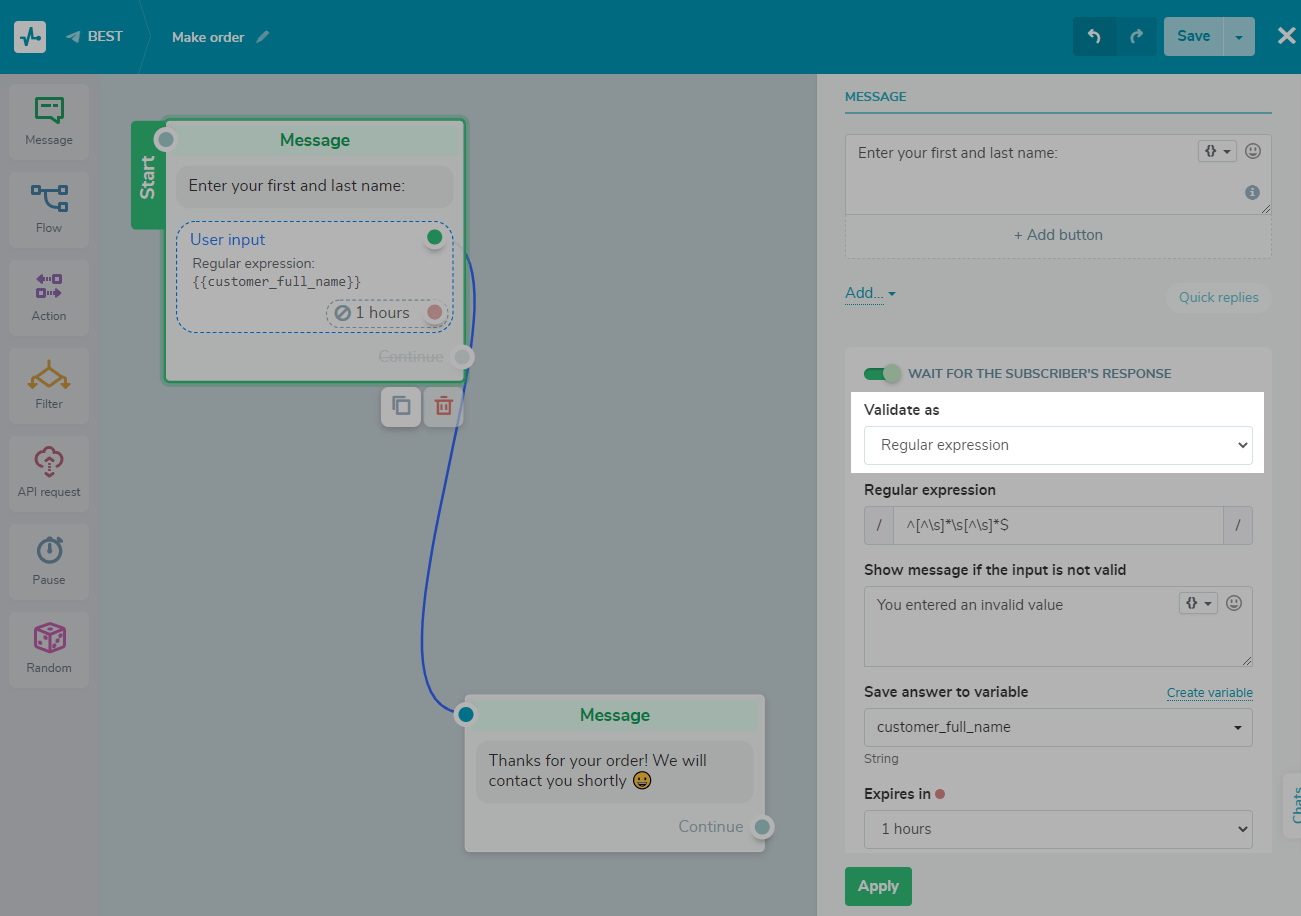 Enter your expression in the Regular Expression field. We will look at an example of an expression to check if you entered "Yes" and "No" with different cases.

You can check regular expression validity on the regex101 website. There, in the "Regex Library" section, you can find templates of commonly used expressions with explanations. 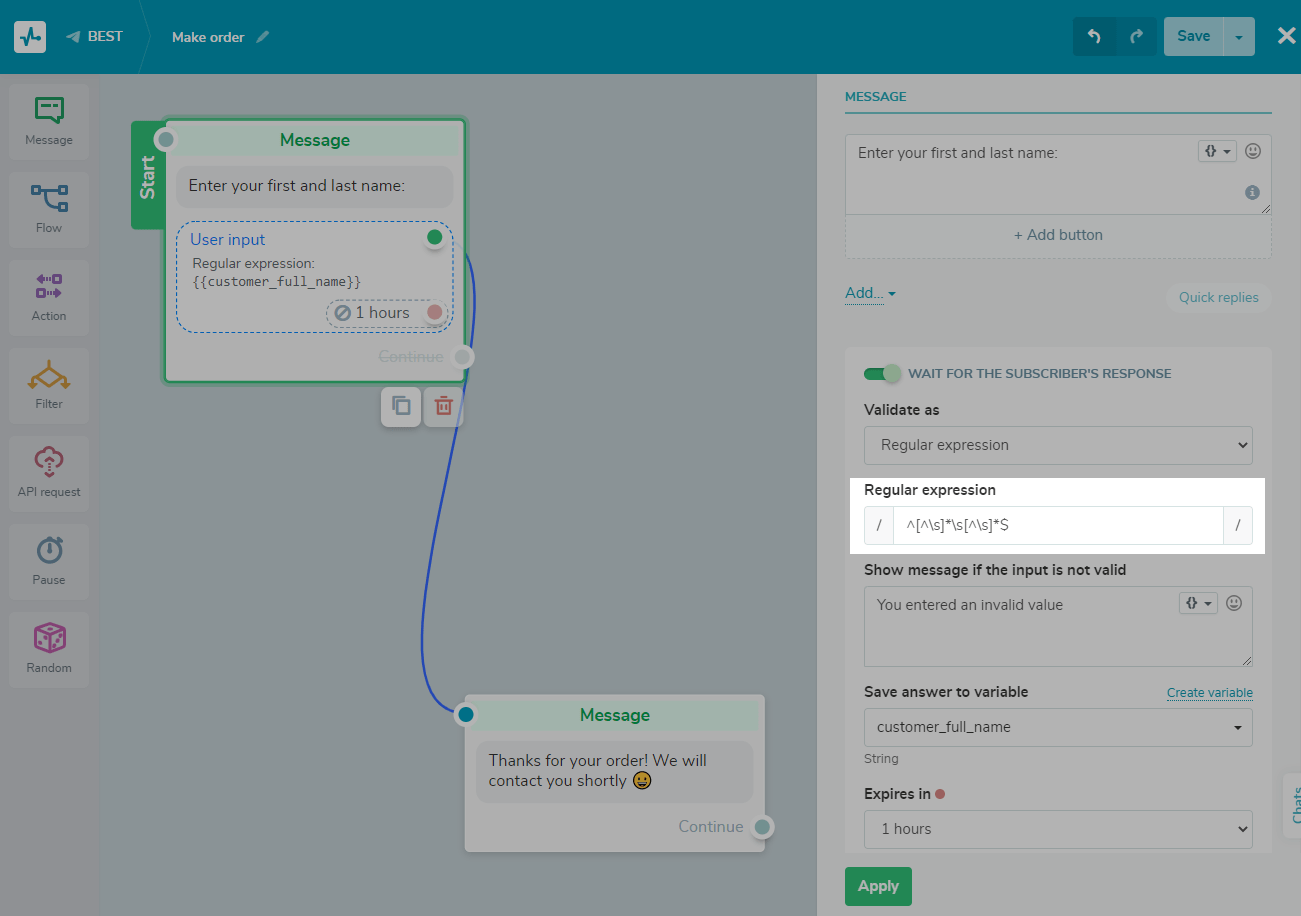 Enter the message to appear when one enters data incorrectly. You can use variables and emojis.

We recommend that you change the default error message and specify what you want to get in response with an example value to make it easier for the user to navigate your bot and provide the correct data. 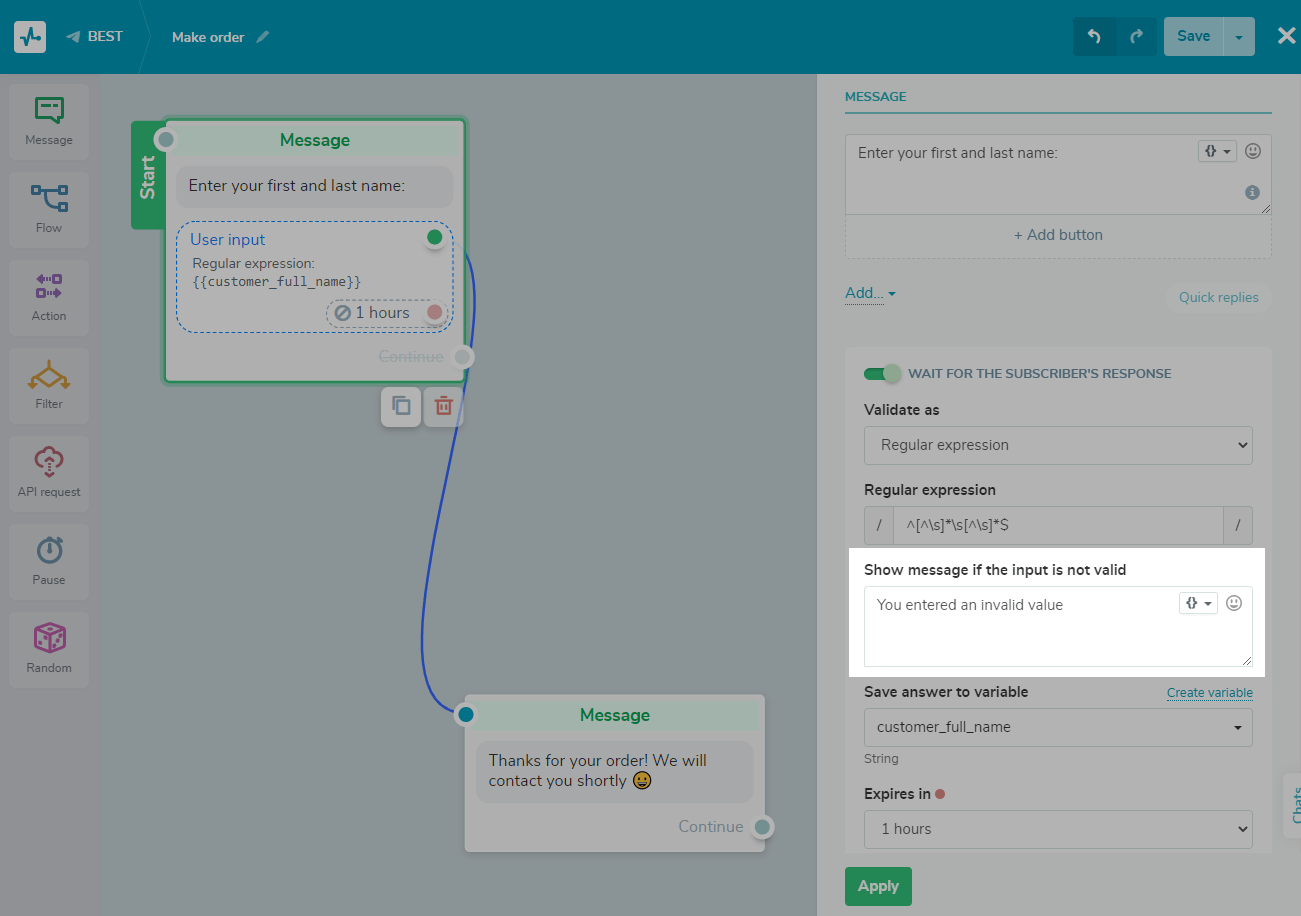 Select the variable you want to save the answer to or create a new one by clicking "Create Variable.” 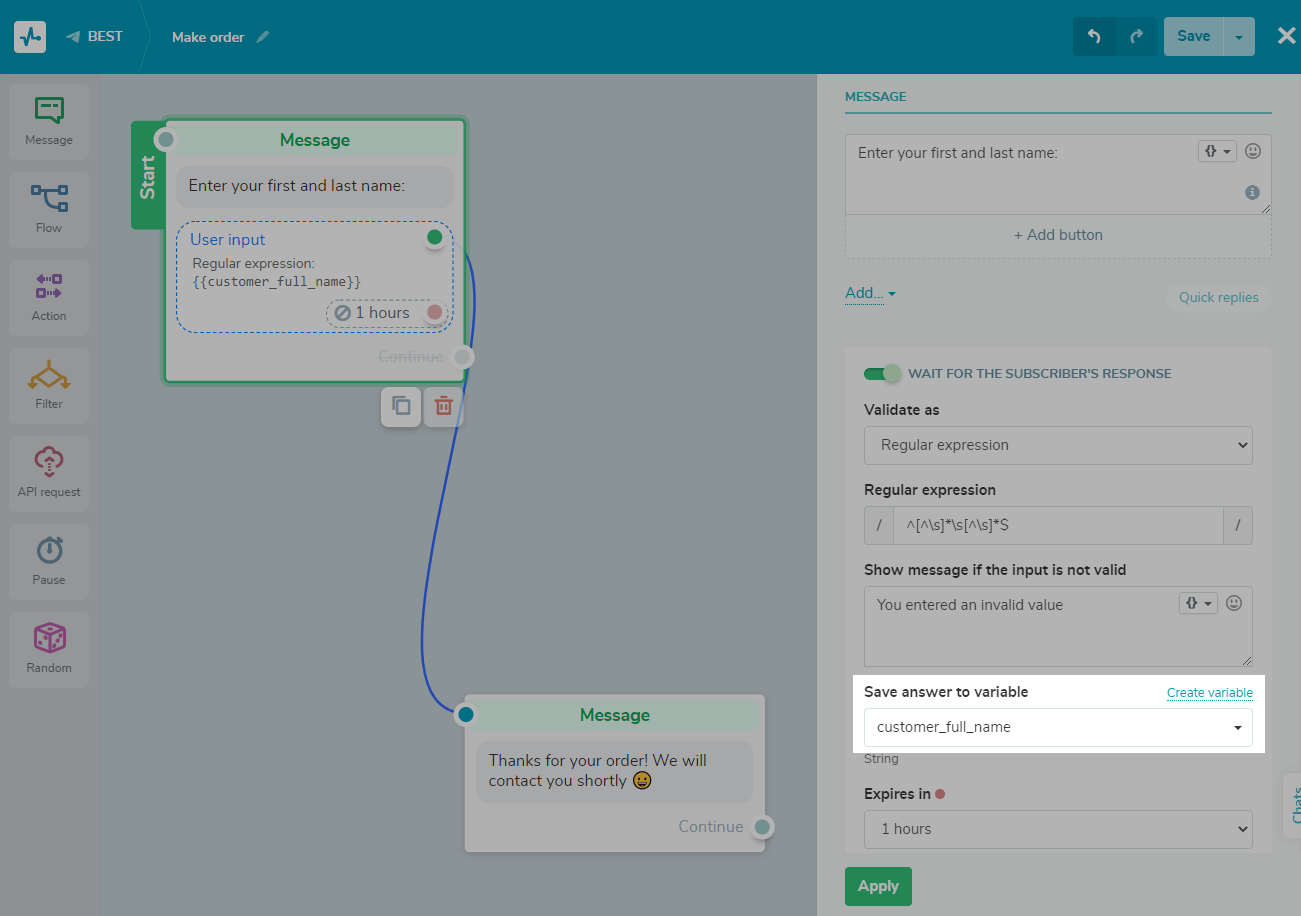 Don't forget to set a waiting period for the response to prevent the user from entering any values other than those you have requested for a period of time.

Note: when the "User input" element is waiting for a response, triggering other flows by triggers and menu clicks does not work. 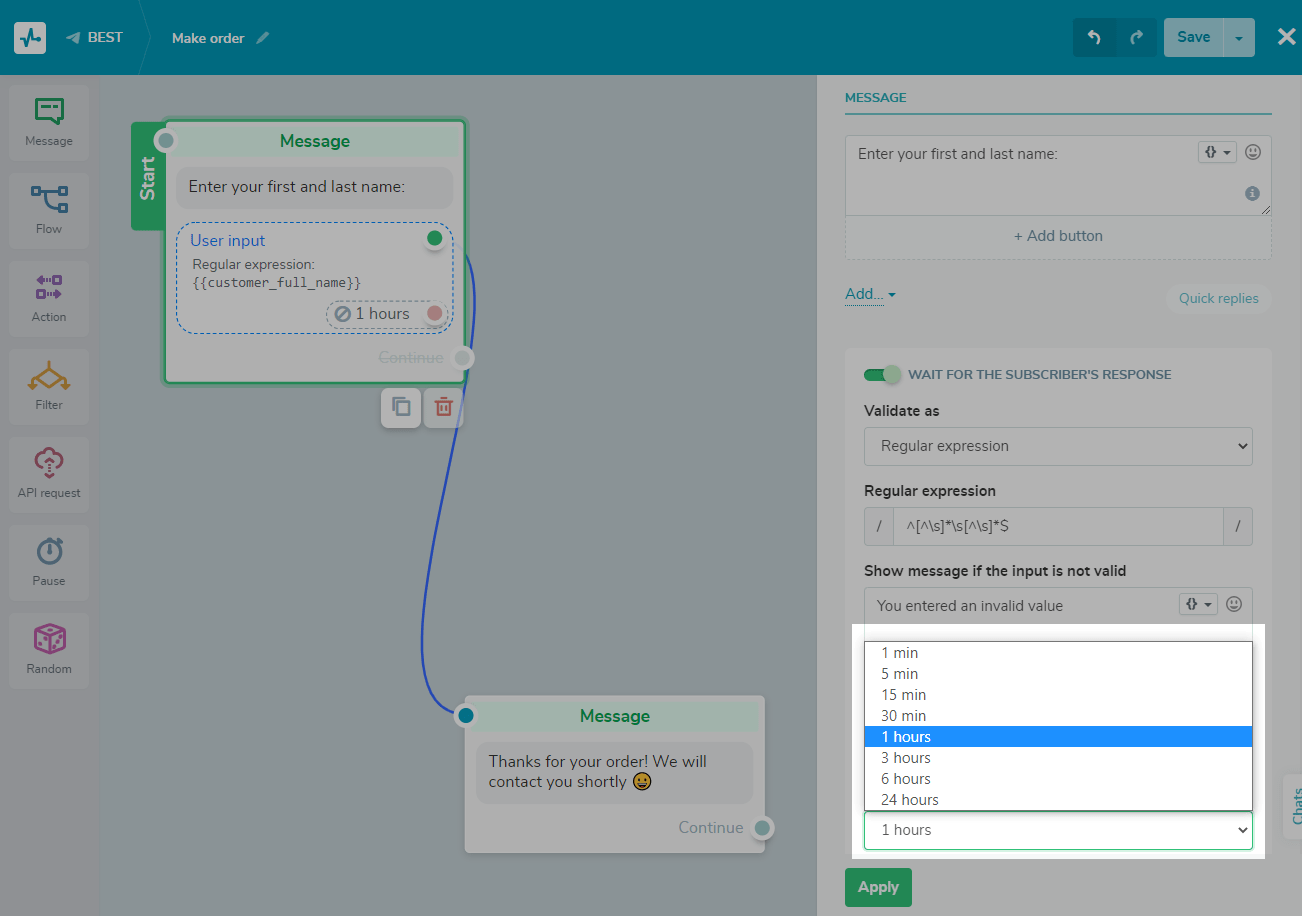 You can also use quick replies for the "Regular expression" validation type to help the users with predefined responses.

How Users Interact with the Bot using a Regular Expression

An example of using regular expressions for dichotomous questions with "Yes" and "No" statements.

In the "Message" element, we add a question, two buttons, and input user data with a regular expression ^(?:Yes|No|)$, where after ?: we enter values that we want to get and write to a variable, | - operator "or,” ^ and $ denote the beginning and end of the string. If the user does not click one of the buttons but enters their own text, that is not relevant to the expected answer, the message will remind you to enter or click one of the statements if the data is entered incorrectly. 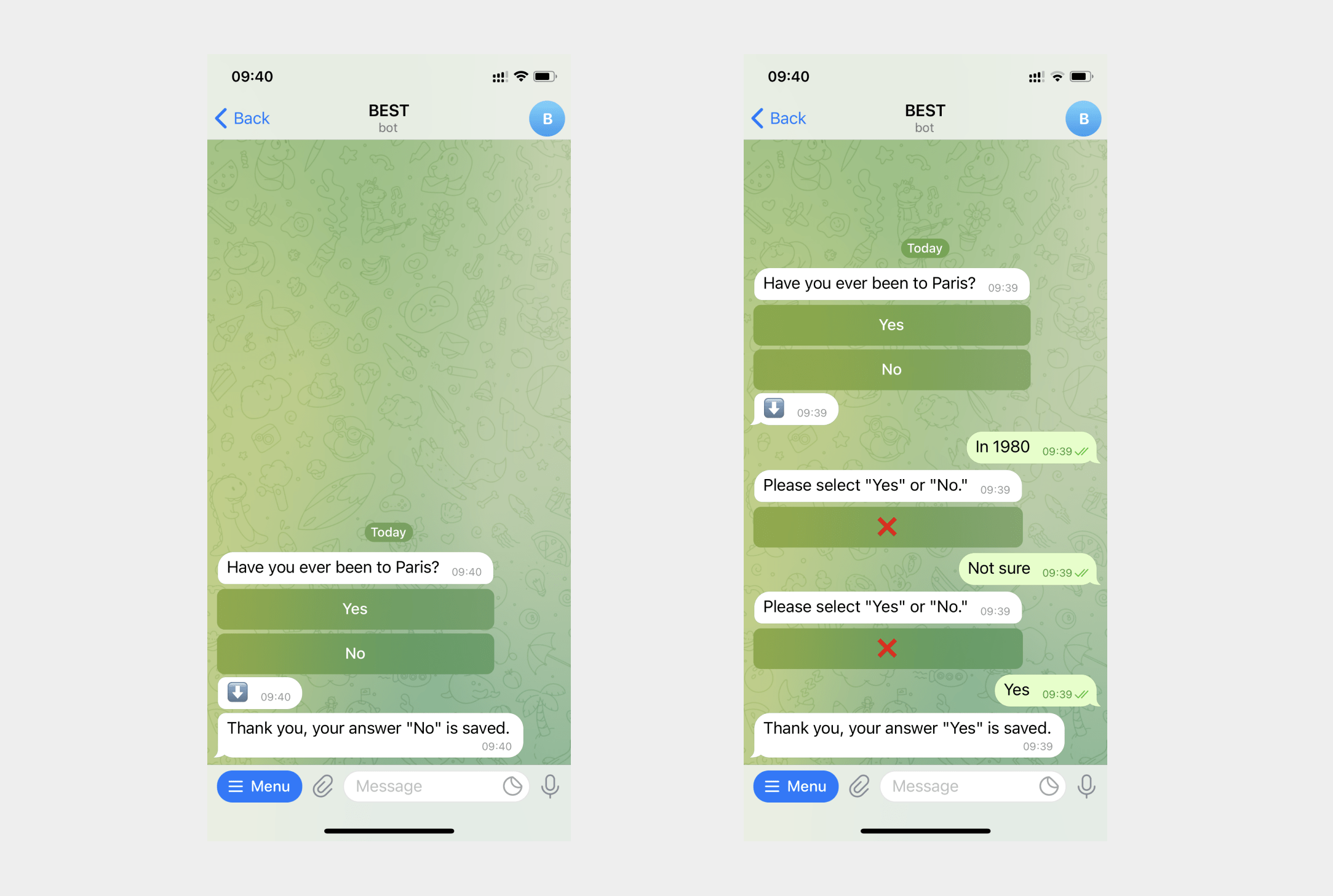 An example of using regular expressions to query for an email address at gmail.com.

If a user enters an email on a domain other than "gmail.com," the message will remind the user to enter an email on the gmail.com domain to access Google Docs, if the data is not entered correctly.

Note that data written using regular expressions is written to variables of the "String" type. You won't be able to send campaigns to them in the service. To collect contact data for sending messages, use the data entry type "Email" and "Phone." 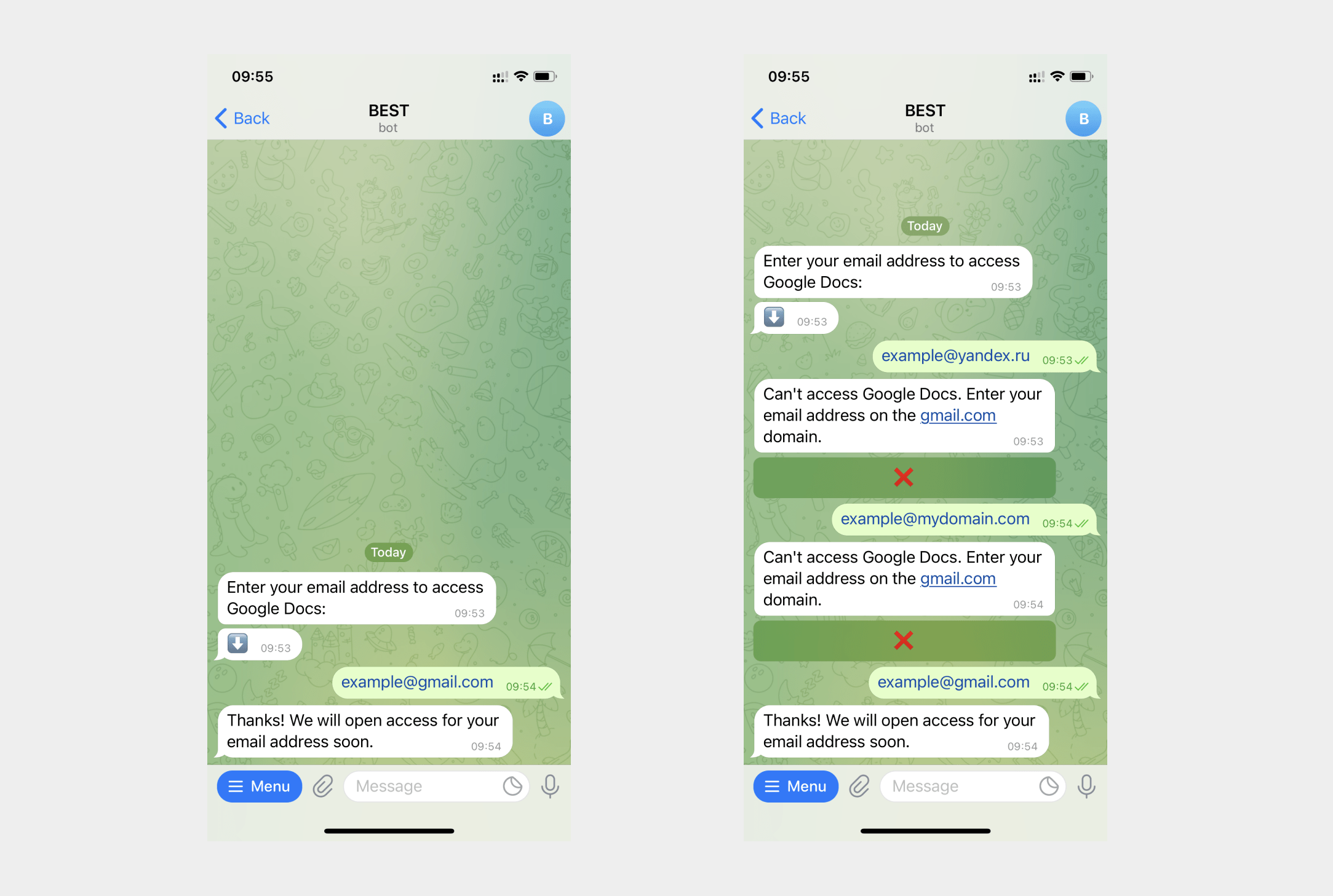 Responses with data from users are saved to chatbot audience variables. You can view saved responses in the Audience tab, use the variables in all subsequent text messages, and create mailings with segmentation.

To check a date in DD/MM/YYYY format:

To verify the date in the format DD.MM.YYYY:

To check for one word per line:

To check for two words in a line:

To check for three words in a line:

Regular expression to check passport series and number (as two letters and six digits without space for old model or xxxxxxxx-xxxxxxx for new model):

To verify a bank card number in the format xxxx-xxxxxx-xxxx-xxxx:

To verify email addresses on domains (for example, to share documents in a Google account to a gmail.com address):

Rate this article about "How to Use Regular Expressions in Chatbots"

Try creating a chatbot for Facebook Messenger for free