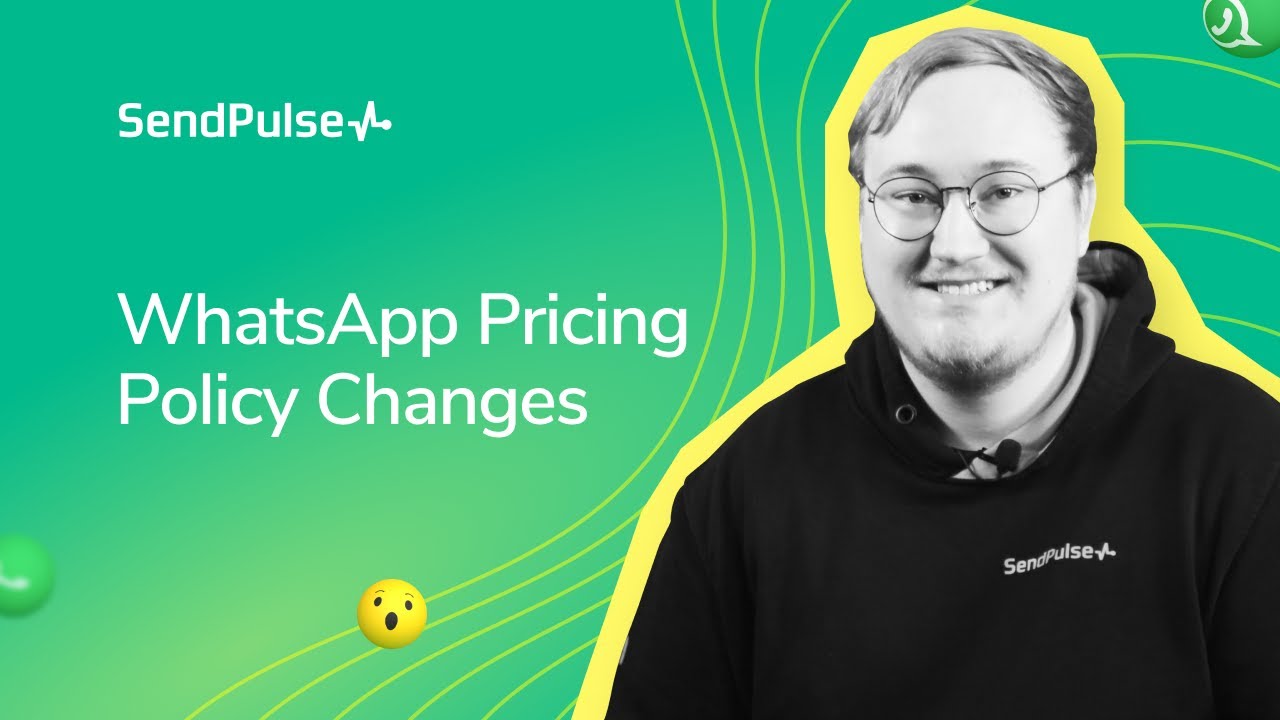 Starting on February 1st, 2022, there will be a new pricing policy for WhatsApp Business API that adds a fee for conversations. In this article, you'll learn what you need to pay more for, where WhatsApp has prepared bonuses, and how to plan your budget.

Depending on who initiates a conversation, WhatsApp Business API separates conversations into two categories:

All conversations are measured in fixed 24-hour sessions.

The session begins as soon as the first message is delivered, initiated by the business or sent in response to the user. The first message in the session is paid, and the following messages within this 24-hour session you can send for free.

The new billing introduces the concept of "Session," which is initiated by the business. Previously, there was only the concept of “Session” (which is now called the “24-hour support window,” during which it was possible to send a free message), which was initiated by the user from the moment of their first interaction with the bot - sending a message or clicking on a button.

A session can be business-initiated or user-initiated. Businesses will be charged for the first message of an open 24-hour session regardless of who starts it. The only difference is that replying to user-initiated messages will cost less for companies. Subsequent messages within a session are free.

You can respond to a user's message and continue your conversation by sending free-form (non-templated) messages. However, you can only send templated messages to start a conversation yourself.

Note: the first templated message will cost you more than it does now, but all of the subsequent messages will not be charged until the end of the conversation.

Check out the prices for sessions in different countries in our pricing list.

The first 1,000 sessions per month are free for your business. This way, you can start conversations for free, encouraging your audience to communicate with you via WhatsApp. Free tier sessions can be both business-initiated or user-initiated.

Please note that you need to have a separate WhatsApp account where you can set up several chatbots.

Free Sessions with Users Who Click on WhatsApp Ad Buttons

You will not be charged for a session if a user starts a conversation with you using call-to-action buttons on ads from WhatsApp or Facebook pages. Remember that these sessions can be started exclusively by users, and only the first session is free. You will be charged for subsequent sessions with these users.

How to Plan your Budget

To predict whether the free limit of 1,000 sessions will be enough for you to communicate with your users, go to the bot statistics section and check the number of sessions for the selected period.

Also from February 1st, a new indicator will be introduced that shows the number of free remaining sessions per month. 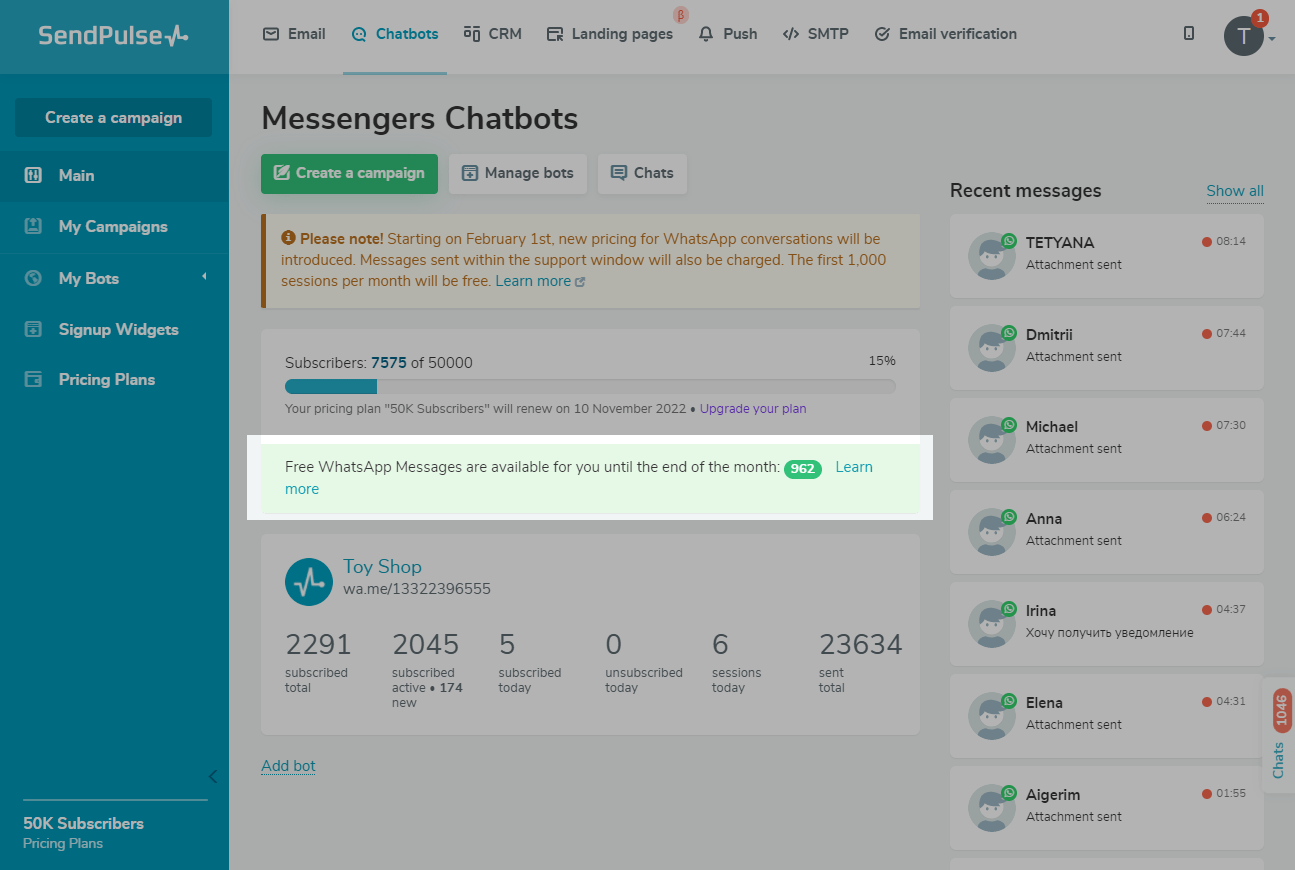 Let's look at a few examples of communication with users in order to understand how billing works according to the new rules.

Scenario #1. A user contacts customer support reps, communicating with them within one 24-hour session.

Anne receives the information she needs in this scenario, and Commercial Air pays for one user-initiated session.

In this scenario, the shoe store pays for two sessions: user-initiated and business-initiated. 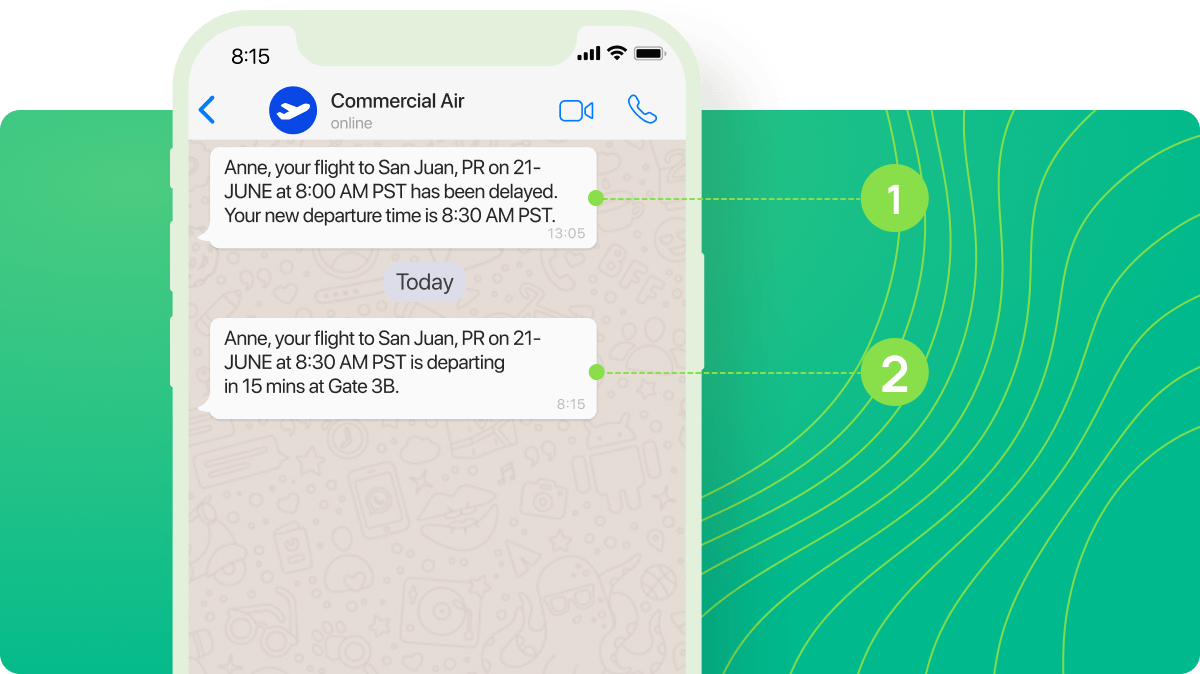 In this scenario, two templated messages are sent within 24 hours, so the business only needs to pay for one business-initiated session.

Scenario #4. A Business-initiated session that consists of one dialogue. 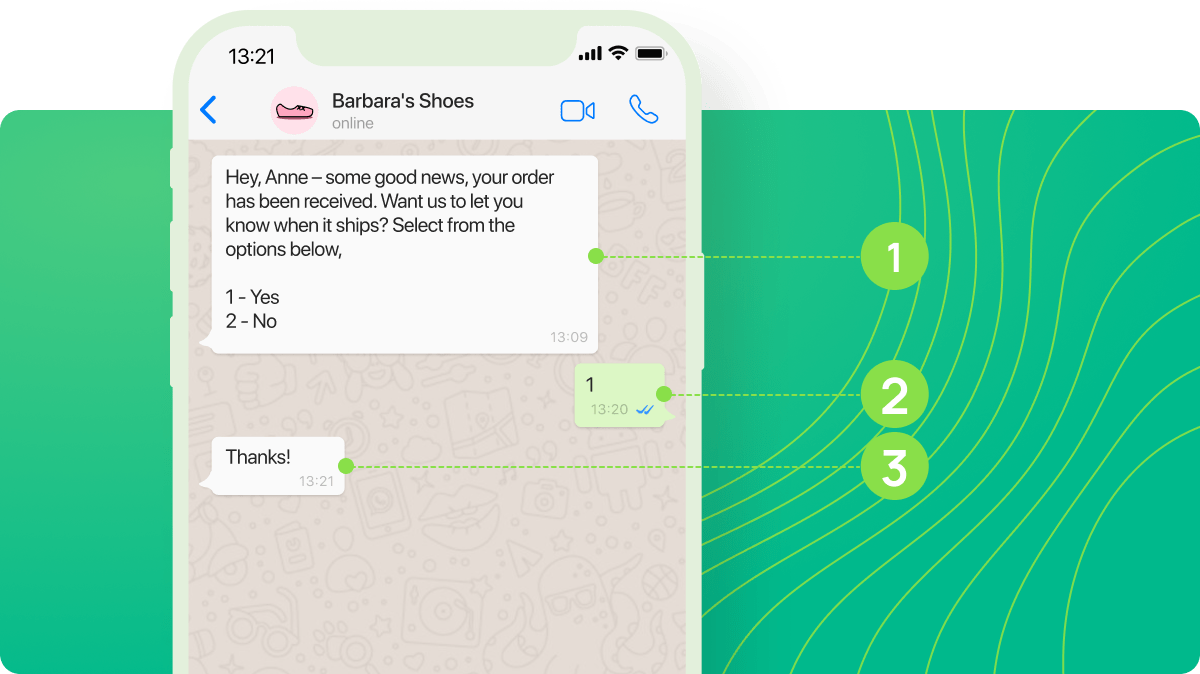 In this scenario, Barbara store pays for a single business-initiated session. If the user responded after the 24-hour period, the company would have to pay extra for a new session.